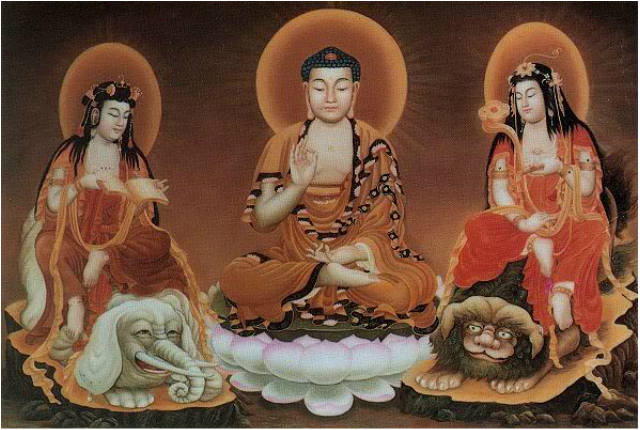 The Pure Land tradition arose in Northern India sometime between 200 – 100 BCE. It was exported to China to become one of the oldest and most influential Buddhist schools in that country. The object of faith in the Pure Land tradition is a Buddha called Amitabha and his Pure Land. In the Mahayana movement there seem to be countless Buddhas each with their own Pure Land, sometimes called Buddha realms.

There is an eastern paradise is the Pure Land of Bhaishajua-guru Buddha (Medicine Guru Buddha). The Abhirati paradise of Buddha Akshobhya is also in the east. In the south is the paradise of Buddha Ratnaketu, in the north that of Buddha Dundubhishvara. A new Pure Land will be created by the future Buddha Maitreya, who presently still dwells in the Tushita Heaven.

They are the hope of believers who wish to be reborn in them. The decisive factor is not their good karma but rather the aid of a given Buddha, who has taken the vow to help all those to rebirth in his Pure Land turn to him in faith.

What does this mean in reality?

These realms represent aspects of the awakened state of mind, and the directions (east, west, etc.) have iconic meanings. For the Pure Land believers, these paradises are geographically localized places of happiness. Rebirth in the Pure Land is said to guarantee no evil exists for the dweller there; the inhabitants would be long-lived and would receive whatever they desired; and from there they might attain Nirvana. In a Pure Land karmic retrogression is no longer possible. However, the attainment of Nirvana is not the goal for the Pure Land Buddhist — it is to be reborn in the Pure Lands where Nirvana is imminently possible.

The most important of these many Pure Land realms is Sukhavati, the “Pure Land of the West” or the “Western Paradise”, ruled by Amitabha Buddha. According to the Amitabha sutras, this particular Pure Land is full of loti and Amitabha Buddha uses lotus as vehicle to receive his adherents to this bliss world earning this school the appellation of "the Lotus school".

The goal of the disciples of this school is to be reborn in the Pure Land of Buddha Amitabha. As described in the sutra, Buddha Amitabha has made a vow to cause all beings to be reborn in his Pure Land Sukhavati. Only a successful practice, including recitation and visualization as the outer condition and total faithful devotion toward Amitabha as the inner condition, can guarantee the rebirth in this paradise. Since its adherents rely upon the external help of Amitabha, the way of the Pure Land School is often regarded as the "faith path" or the "easy path" — but this is a vast over simplification of the complete practice.

The tradition of Pure Land practice can be traced back to the monk Hui-yuan. In 402 A.D. Hui-yuan founded a 30 people group where monks and layman assembled in a temple and vowed to be reborn in the Pure Land before an image of the Buddha Amitabha. Hui-yuan is therefore the first patriarch of this school.

The second patriarch Tan-luan (476-542) contributed considerably to the development of the Pure Land school. He advocated the attainment of liberation in one life cycle is impossible without faith in the infinite power and compassion of Buddha Amitabha. He rejected the "hard path" of the other schools, which required many life cycles of practice to accumulate merit and fostered the "easy path", in which it is sufficient to recite Amitabha's name with complete devotion to be reborn in the Pure Land. He further declared that even evil men were eligible for the Pure Land if they sincerely uttered "Namo Amida Buddha", I take refuge in the Amitabha Buddha”.

It is believed that his following was largely among the laity. There evidence important monk followers of his own who established this tradition as an independent lineage.

Shantao (613-681) is considered the actual founder of the organized Pure Land School. He was the most prolific and successful patriarch of the school. He composed important commentaries on the Amitayurdhyana-sutra. In his time the school experienced a major upsurge, since its practice, compared with that of other schools, seemed relatively easy. It was through Shantao that independent lineages can be found.